Birth Of All Lamborghini Cars So Far 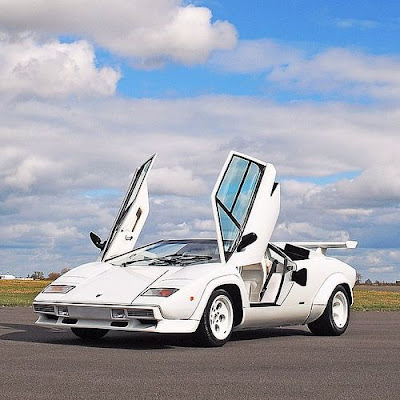 According to legend, the birth of Lamborghini took place after a fight between Enzo Ferrari and Ferruccio Lamborghini. The latter complained Drake is not high quality GT cars from Maranello. See pride, Ferruccio Lamborghini decided to give his life to a car manufacturer. Thus, in 1963, left the development of the first Lamborghini vehicle. The seat of Cento (FE) - where Lamborghini tractors were produced - teamwork composed by the designer Giampaolo Dallara engineer Giotto Bizzarrini and designer Franco Scaglione.

The "trio" gave birth to the Lamborghini 350 GTV prototype supercar displayed at the Turin Motor Show this year and the V12 engine of 3500 which provided for a maximum speed of 280 km / h.

The prototype P400 prefigured the first model Lamborghini vs Ferrari. The Miura, officially presented at the Geneva Motor Show 1966. In addition to being a symbol of Lamborghini, the Miura was the first model to bear the name of a herd of bulls. In fact, the bull became officially Lamborghini brand identity, zodiacal sign, as an owner Ferruccio. The car was designed by Marcello Gandini, the then head of Centro Stile Bertone.

In '69, however, the range was extended to 370 hp Miura S and Sword. The latter adopted the 4000 hp V12 engine and 320 was the standard version of Marzal prototype, designed by Bertone and introduced two years earlier.

In 1972 the range was expanded again with the Lamborghini Urraco, 4 seater sedan designed by Bertone, moved by the engine 2.5 V8 220 hp. At 73, he left the scene of the Lamborghini Miura, Countach LP500 protoripo replaced by the production version.

The Lamborghini crisis was caused by the development of a luxury SUV and alliance with BMW to design the M1. Shortly after the presentation of the prototype in 1980 Athon, Lamborghini went to meet with failure.

Then came the Lamborghini Countach Quattrovalvole in 1985 and the following year, the LM-002 SUV. But to survive, Lamborghini needed an international partner. In 1987, the house Sant'Agata Bolognese was taken over by Chrysler Corporation, headed by Lee Iacocca.

At twenty-five, in 1988 Lamborghini Countach 25 and presented the prototype Genesis. But in '90 debut the first model designed by Chrysler, Lamborghini Diablo with retractable headlights. Versions Three years later the range was extended drive SE VT-wheel. Also in 1993, Ferruccio Lamborghini had disappeared, exactly thirty years after the foundation of self Lamborghini.

Instead, in 1994, Chrysler sold Lamborghini to Indonesian Asian consortium formed MegaTech MYCOM and Malaysia. Other prototypes were presented Cala and Raptor.

The most important event in the history of Lamborghini took place in 98, when control passed into the hands of Audi. The Ingolstadt House again expanded the range of versions Lamborghini Diablo GTR and GT 99, while in 2000, the versions were presented 6.0 and 6.0 SE.

Come the Murciélago and Gallardo

The Audi drill care fruit in 2002 with the Lamborghini Murcielago, designed by the Belgian designer Luc Donkerwolke and equipped with the engine 6.2 V12 580 hp. In addition, the following year, presented the Lamborghini Gallardo, driven by the 5.0 V10 500 hp Audi source.

Birth Of All Lamborghini Cars So Far myadran info 2016-06-21T21:40:00+07:00 5.0 stars based on 35 reviews According to legend, the birth of Lamborghini took place after a fight between Enzo Ferrari and Ferruccio Lamborghini. The latter com...