In "Kung Fu Panda", the filmmakers show the traditional Chinese ethics in this film. We can see that the martial ethics, formed in such Chinese cultural environment, which has become a hallmark of Kung Fu is the essential part of the study and understanding of Chinese martial arts.

Initially, the Panda Po just a lazy guy who loves Kung Fu too, to become the Kung Fu master needs him to work hard to learn Kung Fu. 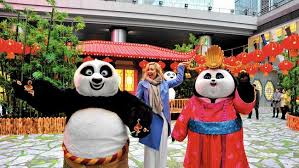 For very sumptuous Shi fu care about him that makes Tai Lang becomes selfish and jealous. There is another old saying: "To feed without teaching, is the fault of the father, to teach without gravity, is the teacher's laziness."

Shi fu very proud of Tai Lang, do Tai Lang becomes blind in his life. Shi fu too many hopes in Tai Lang Lang are Tai became a dangerous man to the Valley of Peace.

"Sometimes you have to pay for their mistakes" For Shi fu like Tai Lang, is to do it, it becomes the enemy of the Valley of Peace, Shi fu need to destroy the only however.

How a father bear to destroy your children?

All these views were strongly expressed by Westerners, although Chinese public, in accordance with the express permission of the Chinese culture. They express Chinese culture in the typical Chinese way.

Since the philosophical connotation of "Kung Fu Panda", we can draw the conclusion that foreigners know our most profound Chinese philosophy before they even use Yin and Yang to show who is the origin of Kung Fu Chinese culture and expressed in his film.

It is a big step so that learning Chinese culture "foreigners.