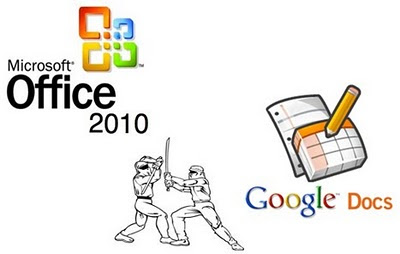 Google Docs vs. Microsoft Office 2010? With free applications like Google Docs and OpenOffice - and free versions of their own Microsoft Office Web applications - which benefits you get from Office 2010, and the value of the potential time and upgrade cost? According to Microsoft, the focus of this big update is on three things: to make the most efficient workflow; effectively use web applications to make your work available anywhere; and to make collaboration with others much easier thanks to a new "SkyDrive" Microsoft (storage of 25GB free online).

The first, and for some, more important change refers to the "tape" controversy (a set of icons that replaces traditional menus and sub structures Office 2003). Fortunately, Office 2010 addresses the biggest problems with previous ribbon interface - allowing you to customize the ribbon through, moving, adding and deleting icons or create your own custom ribbon with commands and options that you use the more frequency. This is a great improvement over Office 2007, and should give confidence to Office users that have so far resisted the migration to tape interface.

The new "Quick Steps" in Outlook will accelerate in the face of repetitive email. Press the "Ignore" long conversations will also save time by hiding all other messages related to a topic you do not want - for example, a corporate event you plan not to participate.

Improving "Conversation View" makes messages son and is a great improvement over previous attempts Outlook to show the structure of back-and-forth messages. It also has the ability to take messages related to email thread that has already been provided and which are not yet in your inbox - a very useful feature that works well.

If you use Excel for actual calculation, you'll be pleased to know that the statistical, mathematical and financial functions were examined. More than 50 new features available, and a number of existing functions have been modified to achieve the purpose of the clearest function.

Dynamic tables and charts have also been improved. Excel generally feels faster to use; open and save files faster, large workbooks with multiple sheets loaded into the graphics in parallel and, in particular, are faster.

One of our favorite new feature of PowerPoint should be PowerPoint Broadcast - quick and easy way to give a presentation to people who are not in the same place as you. You can also turn your presentation on video - including the narrative - in full resolution or resized for the web or mobile phone.

The new image editing tools in Office 2010 are particularly useful in PowerPoint, but you will also have basic tools, but useful video editing. You can trim video into your presentation by dragging a cursor, add fades and other effects such as reflections and 3D bevels and bookmark scenes for use in a video menu.

Most of the new features in Word relate to improvements in visual content; new themes, replacing the tired resort "WordArt", and improvements to the inclusion of pictures and manipulation.

In particular, I loved the new collaboration tools - you can edit a document while another person, provided it is stored on SkyDrive - and is easy to save documents directly there in the desktop menu. This also allows more than one user to edit a document at the same time - with others clearly evidenced changes.

Office 2010 has many new features that make it simply easier to do things. Office 2010 is the first version of Office with versions of 64-bit applications; this means you can work with Excel spreadsheets that are larger than 2 GB, the speed of long documents in Word and treat many more stores email in Outlook. Those looking bare-bones, easy to use should stick with Office software Google and other online offerings or continue to use the earlier versions of Office they have already mastered. But if you are willing to try new features save time and are willing to spend some time to learn where everything is, we think you will enjoy this great update.