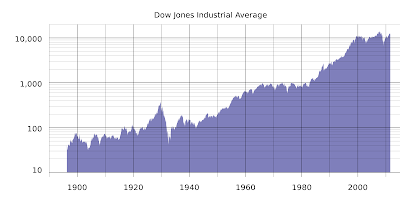 The Dow Jones Industrial Average (DJIA), also known as the Industrial Average, the Dow or Dow 30, is the most followed index of the US stock market with the NASDAQ Composite, the S & P 500 and Russell 2000 Index . It is a stock market index, and one of many clues created by the publisher of the Wall Street Journal and Dow Jones & co-founder Charles Dow. Although Charles Dow compiled the index to measure the performance of the industrial sector in the economy, the performance of the index continues to be influenced not only by economic and corporate reports but also by national political events and foreigners such as war and terrorism and disasters that could lead to economic losses. The Dow Jones Industrial Average, or Dow, the $ measurements can be used to assess the health and direction of the stock market. Dow components trade on NASDAQ OMX and NYSE Euronext, two of the largest companies in the stock market. Dow derivatives trading on the Chicago Board Options Exchange and CME Group, the largest futures exchange company in the world, which holds 90% of the activity of the index based Dow Jones, including Industrial Average.

DJIA 200 days moving average
This value is calculated as the average of all Dow Jones closing values ​​for the past 200 days.

The final value of the Dow divided by the book value for all DJIA stocks, adjusted by the multiplier. Readings greater than 2.5 may be a sell signal.

The sum of all dividends to all shares of the DJIA divided by the most recent value of the DJIA, adjusted by the multiplier. Readings below 3 and above 6 are considered as buy and sell signals respectively.

Dow Jones Transportation Average (DJTA)
An index of 20 companies in the transport sector, including air, rail and trucks.