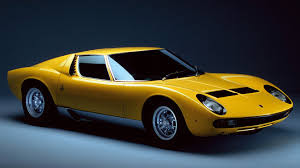 The founder of Lamborghini group was Ferruccio Lamborghini. After a few years of fortunate existence of business (Lamborghini tractor company was incorporated in 1948, later the coverage of activities were expanded in the manufacture of air conditioning, other appliances), having the ability to have the best cars then available and discover their weaknesses, Ferruccio decided to best car ever built. The first step to implement this wish was the incorporation of the company "Automobili Ferruccio Lamborghini SAS" in 1963. Note that any construction / installation and configuration of the plant was financed exclusively from Ferruccio pocket.

The development of the prototype, called P400 started at the initiative of talented engineers Lamborghini Company in 1965. The prototype of Miura was introduced in public for the first time at the Salon of Turin 1965. It was introduced as a car chassis, unnamed. The motor car was a novelty in the days (setting mid-engine page was used only in racing cars), so that even without a "dress", Miura was definitely noticed during the show.

After the Turin Salon Lamborghini has accelerated the development of the design of cars Bertone Design Company was hired to do the look of Miura and concluded that, in a few months.

Lamborghini P400 debuted at the Geneva 1966. Because of the unique design Salon, Lamborghini P400 was undoubtedly the ornament of the 36th Geneva Motor Show, and phrases like "400 hp", "1 meter high" "300 kmh" was also attract the public.

The car was named Miura. The car's development was done at a high speed and the first customers received the cars very late 1966. In fact, the cars were sold as soon as they have not been adequately tested (total test prototype exceeds not when the first 15000 km Miuras were sold). The development of Miura model was continued in the next versions: P400S and P400SV.

Although the cost of this car four Jaguar E-type (the price of Miura was ~ $ 20,000, which will be about $ 114,000 today), Miura 474 units were built and sold in the first 3 years production. Miuras were seized by pop stars and business people.

Many experts have noted the instability of the car while driving at high speed (> 240 km / h). Although later versions of Miura attempted to solve this problem (improved suspension, the most modern tires and bottom front spoiler were installed), which significantly help the situation, but the problem was never completely eliminated.

Miura S is also available with optional air conditioning, which cost over $ 800. However, based on feedback from owners, air conditioning in Miura was not effective and useless.

Miura S 140 units were built between December 1968 and March 1971. Part of Miura known owners of the world was Frank Sinatra.

The last and most desirable is Miura SV (P400SV). This change allowed to use appropriate types of oil for the gearbox and engine. Because of improved carburettors the car gained additional 15 HP (11 kW) and 385 hp (283 kilowatts) in total. Although Miura SV is generally improved between all versions of Miura in terms of handling, it was slightly slower due to the increase in weight (due to the separate lubrication system, wider wheels, etc.).

148 SV models were built in total. The first 52 units of them had a common system of engine lubrication and gearbox.

Lamborghini Company also released the limited version Miura SV / J He improved engine, renewed suspension, some different details and interior design. Only 5 Miuras SV / J were manufactured in total. One of the owners of this car was an actor Nicolas Cage. He bought Miura SV / J at auction in 1997 for $ 490,000.

The design and interior Miura

First sketches of Miura were made by Giorgetto Guigiaro while working at Bertone Design Company. When he left Bertone, Marcello Gandini continued the design work. Finally, a business owner, Nuccio Bertone did the i's and crossed t submit before the final design of Lamborghini. By courtesy of these three men, each detail of Miura design looks taintless.

Interesting
- Due to lack of time, the P400 model, presented at the Geneva Salon in 1966 did not have a motor. Lamborghini engineers to install the engine compartment as the car in Motor Show was without him. The Miura was labeled as a "supercar" also because of its engine position. This is the first Lamborghini production car of roads with central engine.

- The tests showed that Miura managed to reach the top speed of 272 kmh. Regarding this, Miura was titled as the fastest car in the world in 1969, when Ferrari introduced Daytona 365GTB / 4 model;

- Lack of good drainage project in the original rust problems influenced, which is seen in almost all Miuras, except for those who have undergone recent restoration;

- At first it was planned to produce 30 units of Miura, but demand after the Geneva Motor Show dictated the other figures. Not more than Miuras were not built because of the limited capacity of the Lamborghini plant;

- In April 1972 Ferruccio sold the company's controlling shares "Automobili Ferruccio Lamborghini SAS", probably because it has achieved all its objectives with the Miura.

Undoubtedly Miura is the car that famed "Automobili Ferruccio Lamborghini SAS" as car manufacturer. Without Miura, the company probably would not survive. low production figures and emphatic achievements seen in motoring history made this car one of the most desirable collector cars.

Lamborghini Miura myadran info 2016-06-21T21:21:00+07:00 5.0 stars based on 35 reviews I ntroduction The founder of Lamborghini group was Ferruccio Lamborghini. After a few years of fortunate existence of business (L...