Chocolate
Bourdain and Ripert have the perfect compress for the chocolate lover in your life. Last year, Anthony Bourdain and Eric Ripert took their time creating their own chocolate bar, called "Good & Evil". And now, again, reinterpret with Eclat Chocolate, based in Pennsylvania, for a new bar called "Salt & Sin".
Available exclusively at Williams Sonoma, 2.6 ounces chocolate bar with 72% organic, fair trade coconut cocoa beans (so work practices are probably not the sin that the name refers to). However, it is flavored with "complex notes" of Himalayan sea salt, orange, fennel and spices, which can be a bit more tortuous. 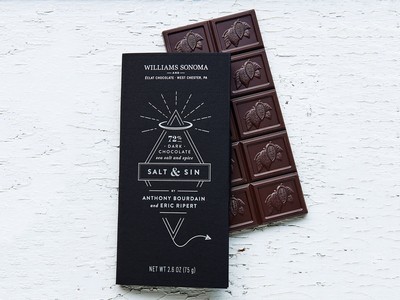 The chocolate collaboration between Bourdain, Ripert and master chocolate maker Éclat Christopher Curtin extends well beyond last year. The "Good & Evil" bar was relaunched in 2016, but debuted in a more expensive format, $ 18 in 2013. Shortly after, Bourdain and Ripert spent part of the Peru episode from unknown parties trying to explore the supply chain that has produced the bar, and the lives of the farmers who produce it first-hand.

In 2016, the bar restarted with an updated recipe and a lower price of $ 12.95, the same as the cost of the new Salt & Sin bar. The combination of flavors is part of the Éclat course, which is known for its parallel bars: chocolates with pairs of contrasting flavors like "Porcini and thyme", "Zuta and orange", "Porcini and thyme", "Green tea and the roasted rice "and" Allpsice & Sesame Seed ".

But the question remains: which chief is salt and what is sin? Well, when the "Good & Evil" bar was relaunched last year, Ripert Food & Wine said in response to a similar question: "I'll let you guess what's good and what's wrong! Maybe the truth does not lie to Hollywood has finally produced the full version of the action movie Bourdain and that the world Ripert so desperately needs to see.